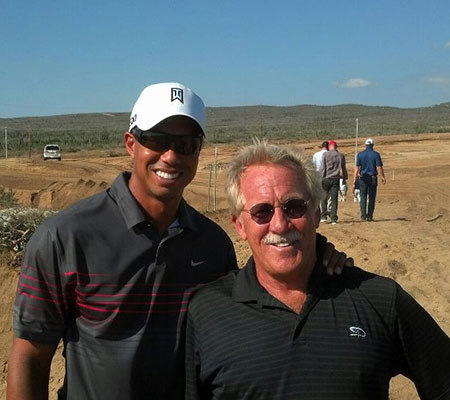 Many times I have been asked "How does one become a Golf Course Architect?"...and equally as many times I fumble for an answer, primarily because there is no single or simple path for a designer to take. My own path begins with what I consider a course designers job description:

"A Golf Course Architect employs a wide variety of skills that he acquires over a life time of experience. It's not an occupation that is taught in college, but it does require a knowledge of Agronomy, Geology, Civil Engineering, Land Planning and Landscape Architecture. This knowledge...when combined with an artist's eye and a designers touch...allows for the creation of a natural arena and the ultimate outdoor play space...a golf course. It doesn't stop there though, as the building of a golf course is a major construction endeavor that requires the organizational skills of a project manager, and a foreman's field skills to put the various parts into a whole...all 18 of them...

...but probably the most important quality a Golf Course Architect must possess is the desire and ability to be physically present while working with the land, because the heart of what constitutes a golf course doesn't come from plans or an office... but from creating and designing while being in the field. I believe this is the only way one can take several hundred acres and make them into something special, and it is this design ability that separates the very BEST golf courses from the very average."

I have spent my lifetime working and travelling the world to acquire and refine these skills, and in the process I've learned it's a path and journey without end... I find that the most exciting thought of all.

Paul was born in Altamont, a small village in Upstate NY. The son of an artist and art professor father and a talented horticulturalist mother, he started early in the landscape world...working at plant nurseries and landscape contracting and at 18 started his first company in dry stone masonry. Paul developed a curiosity and fascination with golf course design and in his early 20's traveled to California and worked as a greens keeper at Pebble Beach and it's sister course, Spyglass Hill. While there he was able to combine the learning of golf course maintenance with the added bonus of being able to play and study these famous courses on a daily basis.

In 1978, Paul moved to Saint Simons Island GA and formed Cowley and Assoc, a landscape development company that grew steadily. He expanded with another office in Destin FL, to become a design/build corporation specializing in resort development in the South East. In 1992 Paul started Linksland Inc., a corporation focusing on land planning, architectural and golf course design.

In 1993 Paul began a collaboration with Davis Love lll and his brother Mark to design and build golf courses. As Senior Designer for Love Golf Design they have built over 22 courses together while developing a rewarding relationship that exists to this day. Paul has also built courses with PGA Professionals Fred Couples and Lanny Wadkins.

In the 2000's Paul became very involved with land preservation and the design and development of conservation communities. While working with the Georgia and Alabama Land Trust he has placed over 3,000 acres of pristine forest and river front in conservation easements that are among the largest in the South East.

In 2004 Paul was sponsored by golf course architect Tom Marzolf to apply for membership in the American Society of Golf Course Architects. Formed in 1946, the ASGCA was the first professional organization of golf course designers in America, and is the premier organization of its kind in the world. He was co sponsored by Pete and Alice Dye and inducted into the Society in 2006.